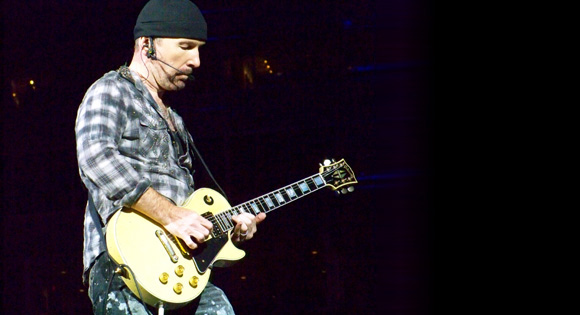 Here are some general instructions on getting the Edge sound. The tabs I've provided have song-specifc instructions as well.

To get a similar sound the most important guitar features to match are the pickup type (single coil or humbucker), the location of the enabled pickup(s) (neck, middle, bridge), and whether its a solid body or hollow body guitar. Matching these will get you a close approximation of the sound. For songs using pickups in both middle and bridge positions its important that the guitar has matching single coil pickups in both positions.

'With Or Without You' and the backing track for 'No Line On The Horizon' both have introductions that require Infinite Sustain, an effect that is not in the signal chain but is on the guitar. The Edge uses a custom Stratocaster with a Fernandez Infinite Sustainer installed where a neck pickup is usually found. An Ebow can be used as a substitute.

As shown on the U2 Guitar Tabs page, only a few songs were originally recorded in Eb (all strings tuned a half step down). Many songs recorded in standard tuning are performed live in Eb. I believe this is to make it easier for Bono to sing at live performances. Tuning to Eb moves all the notes up one fret and the nut becomes the same as fret 11 in standard tuning. Only one song requires unique tuning and that song is The Unforgettable Fire (FADDGD). Here are some brief tips on tuning your guitar.

Guitar strings are rated by gauge (thickness in inches) and come in sets described by two numbers; the smaller number is the high (bottom) E string and the larger number is the low (top) E string. The edge is said to use .011-.052 gauge D'Addario EXL116 XL Medium Top/Heavy Bottom on his Stratocaster, and a variety of strings on other guitars. A heavy bottom (high) E string is important to the sound especially in Eb tuning. This article based on information from The Edge's guitar tech Dallas Schoo, lists many of the strings used. I do not know how reliable that article is.

To match the Edge's sound you need to use the side edge, not the point, of a Herdim blue 1.1 mm nylon pick because of the unique sound made when its texture scrapes across a string. These picks are made in West Germany and can be ordered online. On other “cleaner” songs I'm pretty sure he uses the smooth point of the same pick. This really is a great pick. I've tired a number of materials, thicknesses, and sizes and this would be my favorite pick even if I was not going for an Edgy sound.
My second favorite pick is a Dunlop nylon 1.07 mm which is a slighlty darker shade of blue. I use the Dunlop on heavier rock songs. Although the Herdim says its 1.1 mm, it is definitley softer than the Dunlop 1.07 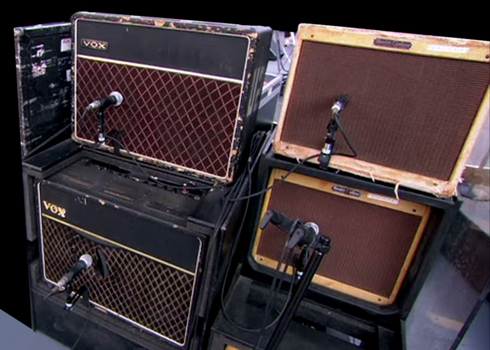 For the majority of songs The Edge uses a 1964 Vox AC30 Top Boost grey panel amplifier in a 2x12 cabinet with Celestion Alnico 12 speakers.

He leaves the settings constant throughout a concert.
It appears in photos of the stage that he plugs into the Low Gain, Brilliant input (the lower right input in the photo below).

Photo of The Edge's AC30s on stage

The most important effect in a U2 song is delay. Every song uses delay to some degree. Some songs (like ‘Bad’ or ‘I still’) are almost unrecognizable without delay. A delay with exact millisecond control is best. Your delay unit should include modulation. I've elaborated on the important subject of delay here.

Another effect in many of the less overdriven U2 songs is reverb. Reverb adds a more subtle type of echo that simulates the sound bouncing off the walls of a room. I believe a plate reverb is used but any reverb type will do.

This boosts the overall amplitude while "squashing" the highest amplitude. This pulls the sound together to a more consistent centered volume. Because the highs are transformed from peaks to flat plateaus this also creates sustain. I recommend you begin any signal chain with this effect no matter what kind of music you play. Experimentation has taught me that the attack setting is very important to getting a nice sounding repeat from the delay unit. Minimum attack gives it a more "crisp" sound and more attack will "muddy" it. He originally used a MXR Dyna Comp.

This is the effect that really differentiates various U2 songs. Remember that amp settings are usually constant so the preamp is where the changes happen. Some preamps that The Edge has used are the Korg SDD-3000 (delay with built-in preamp), the Ibanez TS-9 Tube Screamer (shown below), Boss FET FA-1, and more.

Listed above are the effects used by most if not all U2 songs. There are many other effects that are specific to just a few songs like Wah, Fuzz (Elevation), Rotary (One), Shimmer and Chorus (With or Without), pitch shifting, etc.

TIP: For a lot of U2 songs you want the effects setup right on the edge of "breakup", meaning that the difference between playing softly and playing a little harder translates to the difference between a cleaner tone and a distorted overdriven tone. You can find the breakup line at almost any drive setting by using the volume knob on the guitar or the output level of the first pedal in the effects chain (Boss CS-3 in my case). For example I like the sound of the drive setting on the TS9 at about 11:00 which is pretty dirty, but I can bring that down towards the breakup line by reducing the level at the CS-3 or the volume at the guitar.

Order: Typically distortion and modulation effects come before the amp and time-based effects like delay, reverb, and chorus come after. The amplifier the Edge uses does not have an effects loop so he put all the effects before the amp.

Below is my current effects chain in order. None of the settings in this photo are correct. The Morningstar SDD Pre is built by James Toh in Singapore. It sounds beautiful. I have never owned a Korg SDD 3000 so I cannot compare the two.

The Edge constantly changes his songs. Likewise you may find a tone that is different from the original but arguably better. Learn a song by copying, then I suggest getting comfortable with differences and changes that suit you and your gear. Make it your own and I think you will be happier than trying for a perfect match.

If you have the money and don't want to mess around just get yourself a Fractal Audio Axe FX II with a MIDI footcontroller. That's all you will need to play any U2 song close enough.